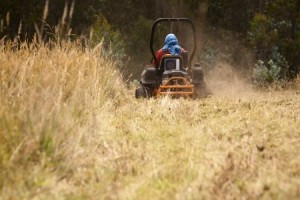 A zero turn mower Roll Over Protective Structure (ROPS) is similar to a roll bar found on race-cars and can be a life saving attachment. A correctly fitted and maintained ROPS, together with the integral seatbelt, can prevent a user from being thrown from a machine or pinned under the mower in the event of an overturn. Most commercial, and an increasing number of home-owner aimed mowers, come with ROPS as standard.

Although manufacturers put their mowers through strict safety testing it is the very manoeuvrability and speed of zero turn mowers which can cause problems, with operators often zooming around obstacles at high speed.

In combination with a safe code of practice and a seatbelt, a ROPS system is effective in reducing serious injuries and death from roll-over accidents.

A correctly fitted ROPS system is vital when tackling slopes. Most manufacturers warn owners of their machines to stay off of any slope of more than 15 degrees. Owner's Manuals usually feature a slope chart or maximum slope rating for a more accurate guideline. When on slopes of a lesser gradient manufacturers usually advise operators to watch their speed and keep movements deliberate and steady. These general safety tips do not, however, take into account other factors. Dangers such as hidden obstacles, wet grass or slippery fall leaves can trip up even the most experienced user. Factors such as these could cause a serious incident even on slopes that have been tackled without incident for years.

Most premium commercial grade zero turn mowers can be fitted with a ROPS system, or indeed will come with one as standard. In other cases owners can source a ROPS system which will fit their mower. Local dealers will be able to advise on the best roll over protection system for your owner and may also be able to tell you if your mower's manufacturer offers a subsidized ROPS or some sort of retrofit program.

Owners of used commercial zero turn mowers which didn't come with a ROPS should fit one as soon as possible. Commercial grade machines are much heavier (some even tip the scales at 1,700 pounds) than those aimed at the residential market. This weight makes them even more of a hazard in the event of an accident. Previous owners may have removed the system because it was hitting low branches etc. People interested in buying a used commercial ZTR may wish to enquire if the seller has the ROPS available. Perhaps it was long removed and forgotten about. Conversely, a seller of a used commercial mower may wish to refit a ROPS if it has been removed, and also stress its inclusion in their advertising. Such extra safety features may sway a buyer towards their mower, rather than another without such an "extra". Just because it was inconvenient to the previous owner, doesn't make it any less of a vital safety feature for the new owner. It may also be worth checking whether the manufacturer of your potential new mower offers a ROPS retrofit program, or at least a subsidised way to order such a system.

Scag is a great example of a manufacturer taking a proactive approach to helping owners better protect themselves. To owners of Scag ZTR mowers which can be fitted with a ROPS system, Scag offer a subsidised folding ROPS for $189. A hillside operation and safety guide is also available from Scag at no cost.

The Toro Company is another manufacturer encouraging buyers of used commercial ZTR mowers to have an overhead rollover protection system fitted if one does not already exist. To further this noble aim of improving operator safety, Toro offer a relatively inexpensive (or even free in some cases) retrofit program.

It is vital for the operator new to zero-turn-radius mowers to have a ROPS fitted. Those coming from a more traditional riding lawn mower background may not be prepared for the speed and manoeuvrability their new machine can deliver. There is a learning curve before these machines can be operated safely. This is particularly true of the homeowner who has just purchased a used commercial zero turn mower, and who just doesn't have the time in the saddle that seasoned commercial operators do. For a homeowner with a lot of hills to tackle a ROPS is vital.